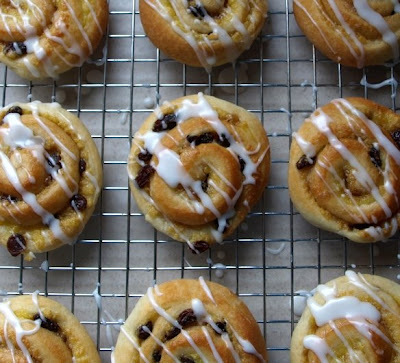 Hi all! You know that chocolate bread pudding the Tuesday's with Dorie crowd just made a coupla days ago? The one where I made my own brioche?

I have a confession to make. 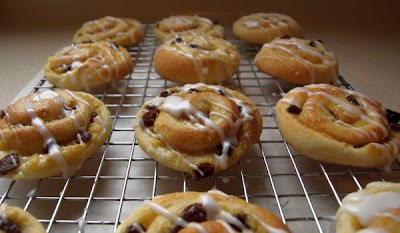 Brioche raisin snails. (Sigh.) To answer your question, yes, they DO taste as good as they look. Maybe even better.

They have a layer of vanilla pastry cream sprinkled with cinnamon sugar and plenty of fat, juicy raisins.

They looked so gorgeous before baking, it was hard putting them in the oven. 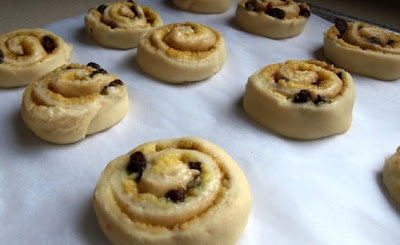 But I did. And I waited. Then I took them out. And waited. And then I tried one.

And I was happy.

(The TWD gang made these in March, 2008. Check out Dorie Greenspan's book, "Baking, From my Home to Yours", or Culinary Concoctions by Peabody's blog to peek at the recipe )
Posted by Jacque at 11:15 PM

i just woke up and wish I had these for breakfast
:) yummy

I wanted to make these for so long.. but kept delaying and delaying. I think they look delicious!

I can see why you were happy! These brioche raisin snails look amazing!! I'm impressed that you were able to wait as long as you did to devour these cuties!

These are addictive!! I made them a while ago and absolutely loved them!! I'm contemplating on making them into mini's for my high tea in July....

Man those look good. Have been wanting to do a breakfast roll for some time now.

lol... and to think we all thought you were some sort of domestic diva! lol

I simply wish I could make bread and brioche, but stone is what comes out of my oven... see? you ARE a domestic diva after all!

I'm so impressed with all of your fabulous rewinds! I've been dying to make the brioche raisin snails. I was going to do it over the holidays but I put it off. Yours look fantastic and delicious!

I've never made brioche, I had planned on doing it on my day off this week but got side tracked. Next week for sure, I love these snails!!!!

They look perfect! I wasn't in TWD when they made these, so this is one that I'd like to try too. Plus I LOVE raisins.

Isn't it fun to put all that icing on top? :)
Also wishing I had this waiting for me for breakfast tomorrow.

the bread pudding was nice, but i can truly say that this is a superior use for a batch of brioche. they're so pretty, and i'm sure they have no trouble finding their way to a person's mouth. :)

This is the rewind that I want to make most of all. They look so very good..!

Those look fantastically yummy! And made your own brioche. Gotta try that.

I still have to make these! Good to get it done this week with the bread pudding! They look great!

Oh it reminded me so much of the pain aux raisins that I would get in the morning from a Parisian patisserie. Yum! Perfect execution.

I joined TWD after these...but there's a rewind in my future, no question! Yours look just perfect...and delicious.

(ps...in case you didn't realize, those boats are the famous (well, probably not so famous) swan boats in the Boston Public Garden. But I liked your version better!)

Never tried making any sort of sweet bread like this. We should add it to the list for a lazy weekend morning.