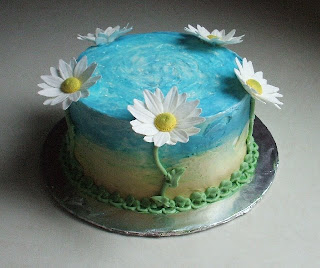 My first Daring Bakers challenge is complete! In case you’re wondering, the Daring Bakers are a great bunch of like-minded folks who bake the same item and report on it at the end of the month. You can check their blogroll at http://daringbakersblogroll.blogspot.com/.

This month, we baked Perfect Party Cake from Dorie Greenspan’s cookbook “Baking – from my home to yours”. You can find the recipe at Morven's site --- HERE. Before I get into the baking I want to point out something. Remember how in one of my first posts I said, “Honestly, I'm tired of making cake and would like to move onto other things”? Ironic, huh? The first thing we bake is cake, LOL.

But it turned out OK, because I got to try another scratch white cake recipe. There was a time when I experimented with MANY scratch white cake recipes. I finally gave up when I got RAVE reviews after baking a doctored box mix cake. (Sigh... I’ve resigned myself to the fact that most folks (in my humble opinion, mind you) prefer the moist, fluffy, tenderness of box mix cake. And, I’ve got to admit, there are a lot of dry scratch cake recipes out there.)

Anyway, where was I? Oh yes, the other exciting news from this baking adventure is that I finally found a meringue buttercream that I actually LIKE!!! Woo hoooo! I’ve tried a number of Italian and Swiss meringue buttercreams and I’ve always thought I should like them, but I found them to be too rich and not right… somehow. I love meringue and I love butter (I can eat it with a spoon, which is gross to think about, I know), but I just never like them together in a buttercream. Until now. It appears that this recipe has a lower proportion of butter… maybe?

The results? I give the cake a solid “B”.

I made the lemon version and it had a nice hint of lemon but not overwhelmingly so, even though I accidently added twice the amount of lemon zest to the cake batter. It seemed the buttercream had more lemon flavor than the cake.

The cake had a nice, tight crumb, which I like. I thought it was a tiny bit dry, though. But as I mentioned, I think this is common with scratch cake. Also, it didn’t rise as much as I’d like even though I used cake flour (as was suggested might be the problem for some). My layers were only 1-1/4 inch tall rather than the normal 2 inches. 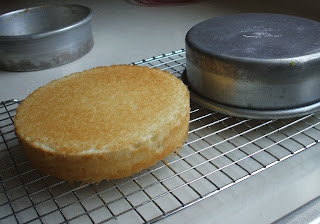 I split the layers and filled with raspberry as directed, but I only used buttercream in the middle layer, since the layers were thin. I thought buttercream on every layer might be a bit much.

Overall, it was a tasty piece of cake. The filling and icing made the dryness not as noticeable. I would consider baking this again. I would try a few modifications, however… perhaps try adding some simply syrup to the baked cake layers to moisten them and also bake another layer or two to make the cake taller.So, here it is. My Van Gogh-inspired version of Perfect Party Cake (after one of the daisies was attacked by my dear child (little stinker)): 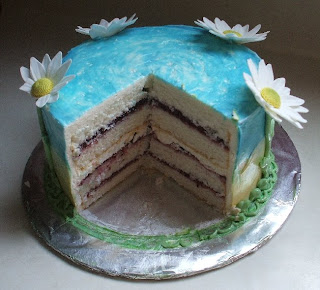 Posted by Jacque at 9:31 AM No comments:

I forgot to post the finished tart from my failed first-tart experience (say that 10 times fast). 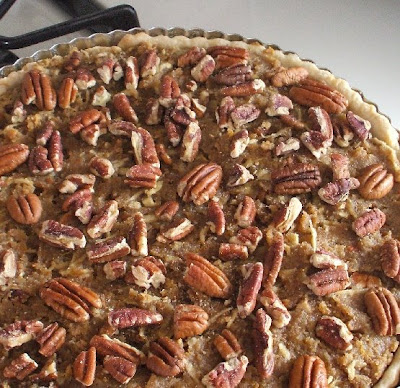 My first real baking entry… yeah! I guess I need to explain a few things first. I love to bake, I love to experiment and try new recipes. Trouble is, I also like to eat those experiments. However, I don’t like wearing those recipes on my thighs and/or backside so I don’t bake as much as I’d like to. But every now and then I find an excuse to bake and share the goods with others, as is the case with this first entry. Event: monthly cake decorating club meeting. Recipe: Maple Syrup and Pecan Tart from Jamie Oliver’s “Jamie’s Dinners”.

It looks scrumptious in the full page color photo from the book; dark and moist with a slightly crispy looking top and succulent center. Almost like pecan pie but with more substance to the filling. The substance, I soon found out, was due to the addition of bread crumbs. A bit unusual, but as I said earlier I like to try new things and I was game. I imagined this recipe as a cross between pecan pie and bread pudding, both of which I’m quite fond.

All went well with my shortcrust pastry. I was nervous because the one time I tried making pie dough previously, it was a disaster. Not enough liquid in the dough made it crumbly, dry, and impossible-to-roll-out.

I cut the butter into the flour using both my pastry cutter and my fingers. I really liked how soft and silky the mixture felt. 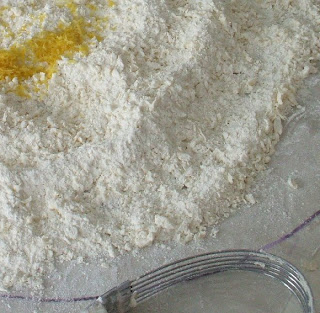 After adding the eggs, lemon zest and two splashes of milk, I had what I thought to be a decent, not-overworked dough. I could still see little bits of butter in the dough. 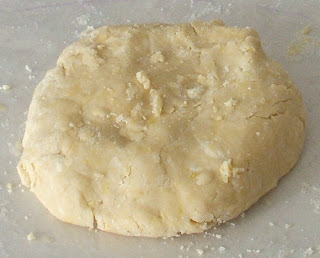 While the dough chilled in the fridge, I assembled my filling ingredients. There were a couple of things that stood out. One, the pure maple syrup tasted slightly bitter to me. I’ve never tasted the “real thing” before, being a longtime fan of Mrs. Butterworth's, so I’m not sure how pure maple syrup is supposed to taste. Two, it seemed like a lot of bread crumbs. The recipe called for 3 cups, half fine and half coarse. Well, I only know of one kind of purchased bread crumbs and that’s what I had. Upon inspection, I was guessing they were fine. (A quick internet search for breadcrumbs shows only a difference in flavor, such as “plain” or “Italian”.) Maybe British bakers make their own breadcrumbs? Lastly, the zest from two oranges seemed like a LOT, but, I had no basis for comparison so I forged ahead. 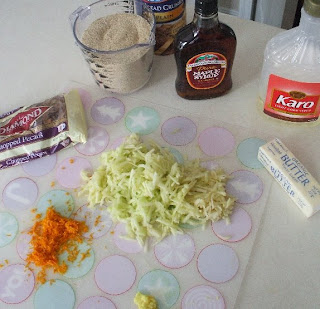 While the crust was baking, I made my filling. Once I dumped the bread crumbs in and started mixing I had a sneaking suspicion something was wrong. The filling was dry and thick. I could have formed it into balls with my hands if I wanted. Plus it had an overwhelming orange flavor, a bitter orange flavor at that. I honestly couldn’t taste the maple at all. But, I continued on, spreading it into the cooled crust. I spread the handful of pecans over top. (I had dough and filling left over so made some individual desserts.) 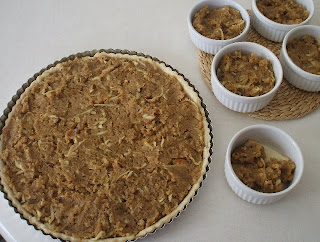 I was hoping the oven would perform a small miracle, but alas, it was not to be. The baked tart was much the same as unbaked, just more “set”.

Once I got used to the idea that it was more orange flavored than pecan or maple, plus got over the fact that it wasn’t moist, well, it wasn’t too bad. I could take it or leave it, really. And the folks at cake club ate it, so, I got credit for bringing refreshments.

Now, I did go back and do some investigating, and guess what? Three cups of bread crumbs is WAY too much. I found the recipe online HERE and it calls for 6 oz. of bread crumbs rather than 3 cups. I just happened to have another container of Progresso plain bread crumbs so I measured out 3 cups to see how much it weighs. It was 13 ounces!! More than double what’s called for. Mystery solved!

I don’t know, I may try this again. If I do, I’ll use the weight measurement for the bread crumbs and I’ll cut way back on the orange zest; maybe a teaspoon. (I’m guessing I got 1-1/2 to 2 TABLESPOONS from the 2 oranges called for.)

But then, I might not try it again. I’ve got so many other recipes I want to try. I’m a tough recipe critic. For the most part, they’ve got one chance. If they’re not delish the first time, I’m moving on, baby.