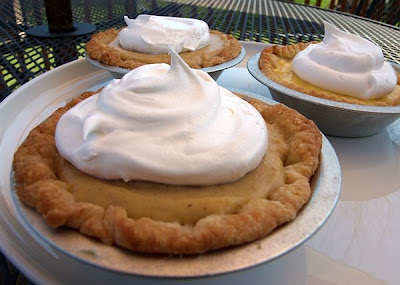 Many thanks to Amy of Sing for Your Supper, who chose Banana Cream Pie for this week's Tuesday's with Dorie recipe. Who doesn't love banana cream pie? (All of you banana cream pie haters, just shush ;-) )

I've made enough pie now that it doesn't strike fear in my heart like it used to. Still, I'm far from an expert.

I have a sneaking suspicion that I need to try a different pie crust recipe (sorry, Dorie! it's me, not you!). I simply can not get the edge of the crust to hold it's shape and not shrink. Following the advice of long-time pie bakers, I made sure to have plenty of dough at the edge. I chilled the dough after rolling it out and before placing it in the pan. I took extreme care not to stretch the dough while I was putting it in the pan. I chilled the crusts in their pans for over an hour before popping them in the oven.

And yet, I got shrunken, shriveled crusts... 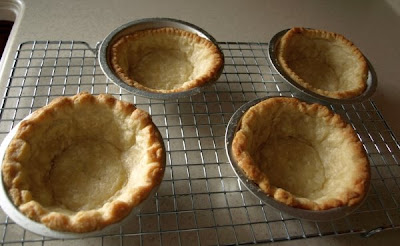 Fortunately, the crust isn't the star of this show, the filling is. This is not your typical creamy vanilla-flavored banana cream pie filling. It's more the exotic cousin of your standard filling, with brown sugar, cinnamon, and nutmeg. It was the color of pale peanut butter. 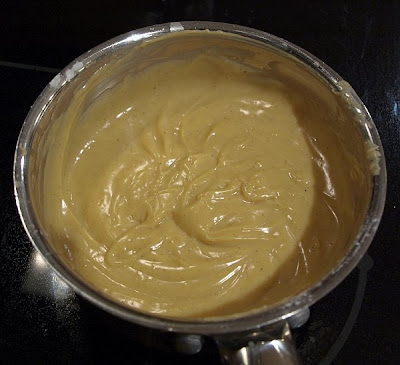 It thought it tasted fantastic. I could have been easily satisfied naming it cinnamon pudding and calling it a day.

But, with the pie shells already made, it wasn't much more effort to transform it into pie... 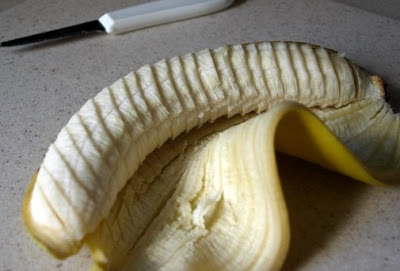 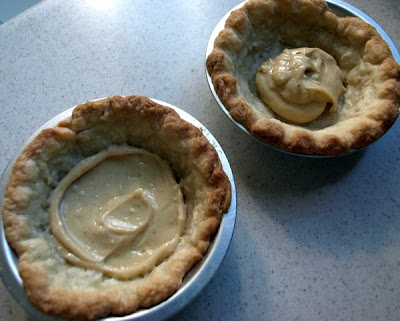 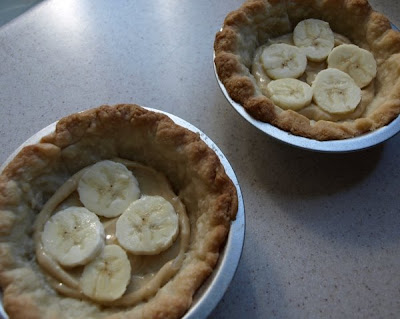 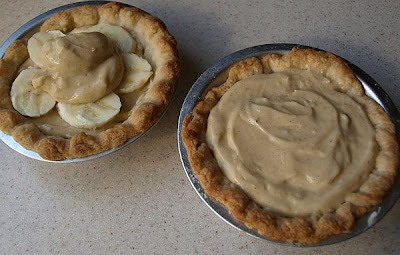 I guess it's time for a confession. I really don't like making whipped cream. It's just sooooo much easier to grab mother's little helper out of the freezer... 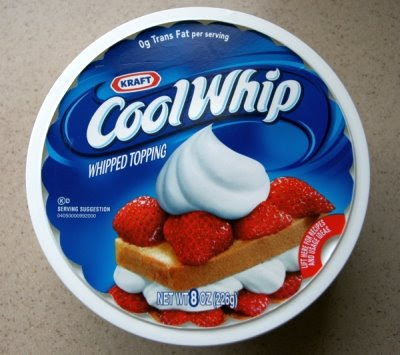 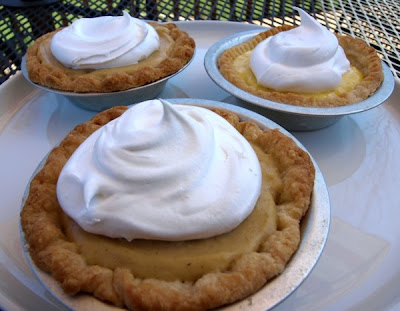 I also made the Orange Cream Tart this week. I made a quarter of the recipe and it fit perfectly into a mini pie shell. 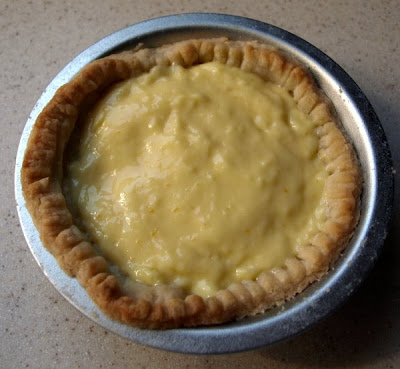 This was almost the same dessert as The Most Extraordinary Lemon Cream Tart, with the juice being different, of course, as well as the addition of gelatin. 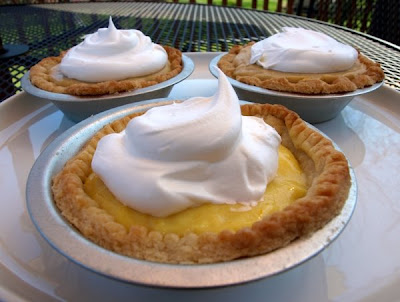 It was fabulous and tasted like a pie version of a Creamsicle. You can find the recipe HERE at the Brown-Eyed Baker's blog.

I really enjoyed both of these pies and would be hard pressed to pick a favorite. All in all, they made for a good baking week.

OK, see you next week, when we start a chocolate triple header.
Posted by Jacque at 12:01 AM

no one's going to blame you for using the cool whip. hehe. The pie still looks lovely! great job with both of em.

Oooh! I want that creamsicle tart! Looks great! Love the minis.
Your crust didnt' shrink as much as mine did!

I love cool whip, but this whipped cream was great.

The only thing you didn't do when you baked those crusts was to weigh them down.

Put a piece of foil in the bottom of the raw pie shells, pour in some dried beans. Bake for half the amount of time called for, take off the foil/beans and finish baking.

Two pies, this is our lucky day! Both look fabulous!

Your tarts are so cute...there's just something about miniature anything that I can not resist!

nothing wrong with shrunken, shriveled crusts, especially when they're covered with yummy filling like this. and i love that banana shot. :)

I had crust shrinkage too! It seems like this was a common problem. No matter, your little pies look gorgeous! Love the orange cream tart, too!

Amy of Sing For Your Supper said...

Mmmm, these look absolutely delicious!! Thanks for baking with me this week!

I thought mother's little helper was Xanax? Which is what I usually need after dealing with a finicky pie crust. Which is why I made a graham crust instead.

Mmmmm! A creamsicle tart!? That sounds AWESOME! Both of your versions look awesome!

Exotic cousin is the perfect description for the banana cream custard. The orange cream sounds great!

Mmmmm...creamscicle pie sounds very tempting. Both versions look great! And I had a bit of shrinkage in my crust, too.

Both the banana cream pie and orange cream tart look delicious. I need to make the tart.

MMM, both of your pies look delicious. I especially love the idea of an "orange creamsicle" tasting pie. How fabulous! And the idea of cinnamon pudding also sounds fabulous. Man, oh man, two tasty treats. How great!

This look delicious! This pie was a hit at my house :)

I have the same feeling about the crust - I have made other recipes with more success. This was good anyway, though!

My crust shrunk too so I feel your pain. Your mini pies look terrific!

Your pies are beautiful! I had trouble with my crust tearing. Oops. I didn't chill it. Next time! It still tasted good. :)