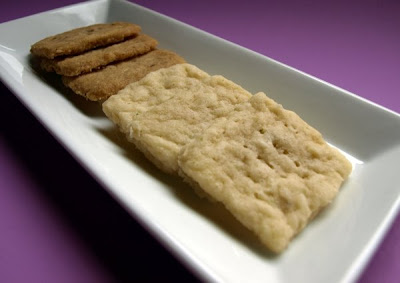 to the same recipe, with the exceptions being the sugar, nuts, and flavoring. Cool! I didn't have to think as hard. The shortbread contained ground pecans and cloves, while the butter thins contained ground macadamias, lime zest, coconut, and coriander. (I know, it's an unusual combination, but somehow it worked.) 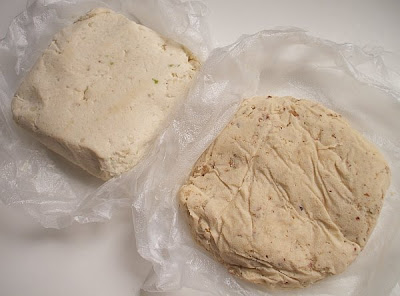 Not surprisingly, they both looked basically the same when finished... kind of flat, a little bumpy (not like the pretty shortbread squares in the book). And they were both really tasty. 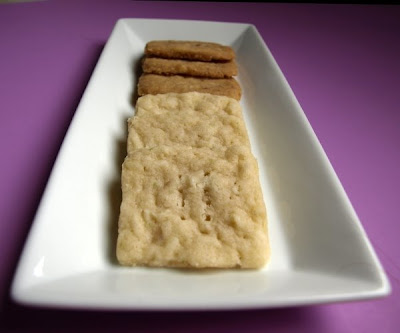 ... and the brown-sugar pecan shortbread. 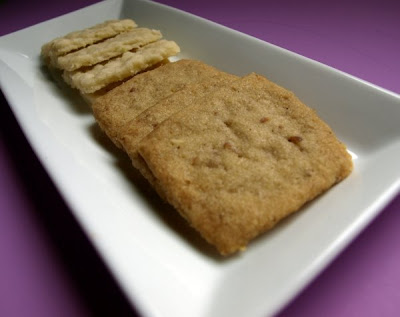 Really, it's a disservice to call the Coconut Butter Thins tasty. "Tasty" is an understatement. They were flipping AWESOME!! I would put them squarely in my Top 5 Dorie Greenspan recipes. Maybe even Top 3.

Thanks so much to Jayne for a terrific pick this week. If you'd like to see the recipe, check out Dorie Greenspan's book "Baking: From my Home to Yours", or take a peek at Jayne's blog.

See you next week when the gang rolls out Banana Cream Pie (can't wait!).
Posted by Jacque at 12:01 AM

i agree they were tasty.. but I'm still bewildered as to how they look soo perfect in the book.. *sigh*

Sure wish I could try them - that's a pretty high ranking - they went like hot cakes at work!

Mmm, both of these cookies sound delicious. But the coconut butter sounds out of this world. With your glowing review, how could I not make these ASAP?

I had no idea how much I would like these cookies! I made 1/2 the recipe and I want them all for myself. Nice job!

Glad to see that you loved this weeks recipe! I really liked them too!! However I seem to have a problem with shortbread dough: it spreads all the time when I try to bake cookies... :(

I love that you made both of these cookies this week. I made the pecan shortbread in January and I liked it . . . but I loved this week's coconut shortbread. I thought that they were super tasty! I love how perfect and even all of your cookies turned out.

These were tasty! So cool that you did both, they look fab!

They both look awesome! I'm glad you made the brown sugar pecan shortbread...I was thinking about making that one too! How did the cloves taste in them? Very smart to only make a 1/4th recipe.

they definitely look as thought they'd melt right on your tongue, and that's just awesome.

Yes, they WERE flipping awesome! I will make these again and again. They are a perfect warm weather cookie with that great tropical feel. Yours look beautiful, and I love seeing them next to the brown sugar shortbread!

Yes these cookies were the bomb! Im glad you liked them too!

these look great. the taste must be awesome :)

Mine did not look as perfect as yours. But weren't they just the tastiest little morsels ever? :)

These cookies were so addicting I made my husband take them to work. Yours look great. Now I have to try the pecan ones!

I'm glad you liked them. Both of your cookies look really good!

I loved these too.

I felt the same about these delicious treats --- definitely one of my TWD favs. Fantastic job on your cookies!

I didn't have time to bake the TWD cookies this week but I'm going to try do it sometime in the near future.

I was surprised at how good this flavor combination was, too!

Well they look gorgeous! I liked these cookies more than I thought I would. I keep nibbling at them LOL

These cookies are delicious. I wish i still had some left :)

Oh, head to head shortbread. Darn, I wish I had thought of that. I really need to start working on my catch up recipes; we only have about three more years of baking. They both look great. I am glad to know to expect tasty results when I do get around to the pecan shortbread.

I haven't made the pecan shortbread yet, but it seems I should add it to the list. Which one was your favorite?