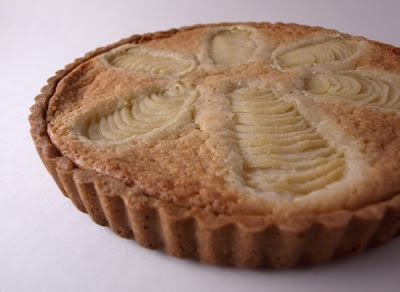 One year ago, Laurie, from quirky cupcake decided she wanted to "bake through" the cookbook "Baking: From my Home to Yours", by Dorie Greenspan, which means she planned to bake every single solitary recipe from the book. This is no small feat, considering there are hundreds of recipes. I don't even know how many... 200? 300?

She asked if anyone would like to join her, and "Tuesday's with Dorie" was born.

The response was overwhelming. Of course, we bakers wanted to join in! It's a gorgeously photographed book with a huge variety of delicious sounding recipes. Who could resist?

In celebration of TWD's one year anniversary, Dorie Greenspan herself has chosen this week's recipe French Pear Tart. 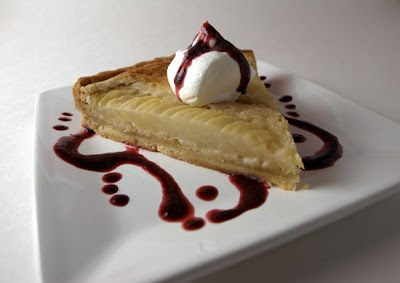 (I topped one slice with blackberry puree.)

The tart consists of a sweet tart dough (which reminds me of a shortbread cookie) with a ground almond based filling topped with sliced pear halves.

The verdict? I'm already a fan of almond flavored desserts so it wasn't hard for me to love this tart. The pears gave it a velvety sweetness that perfectly complimented the almond filling. It almost seemed to me like a giant cookie, topped with almondy goodness.

I would definitely make this again. 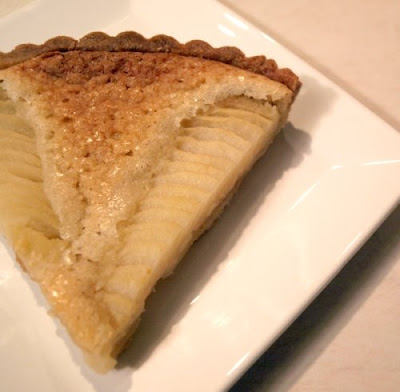 Thanks so much to Dorie for picking this lovely dessert (you can find the recipe on Dorie's site, or better yet, do yourself a favor and buy the book) and to Laurie for starting this most awesome baking group. I personally have grown by leaps and bounds as a baker, and also I've become much more open-minded about trying new flavors. Thank you both!!
Posted by Jacque at 12:01 AM

Looks beautiful! I'd make this again in an instant.

My word, it really is possible to get those pears lined up in the pan perfectly! Your tart is amazing.
Nancy

Your tart looks stunning. I love how you decorated it with the sauce too. Impressive.

Your tart is stunning. I made the crust without almonds, but I love almonds as well and might try it that way next time. We adored this tart. Yours is perfect!

Oh wow is your tart gorgeous!! I can taste it through my computer! I still have to finish mine up, hope to do so tomorrow!

Why, oh why didn't I understand the directions to fan out the pears???

It's beautiful! You always make everything look so good!

Your crust is perfect! The tart looks amazing...wasn't it yummy?

This was one of the best recipes I think I have made so far! Your tart looks great. Good job. i love th euse of the blackberry puree.

That picture with the syrup looks to die for good. What a great tart. I loved this recipe and will make it again.

I loved it too. And yours looks perfectly baked, and gorgeous! Mine was a bit over-cooked, but still yummy.

sometimes i rue the fact that i'll probably never make a perfect anything. you seem to do it repeatedly, and this tart is no exception. very nice, jacque. :)

I agree with Grace, everything you do always turns out perfectly. I should have you inspect my desserts before I present them to the public!

Amy of Sing For Your Supper said...

Ooooh wow- this looks great! I love that second picture!!

Yours looks straight out of a photo-shoot!
Absolutely perfect.

Beautiful! Such a perfect looking tart.

Your tart and photos look fabulous - I really love the color of the puree against the white plate and the yellow of the tart. Beautiful!

The picture of the tart with the sauce is soooo beautiful!!

Your tart looks great! YUM to the blackberry puree. I want to ask a question about your photos - can you send me an email so I can email you back? ers1113@gmail.com.
Thanks!

Gorgeous! Dorie will be proud!

So, so pretty! It is truly picture perfect!

Look at those thin slices! Perfection.

This looks stunning! I would love the puree with it as well. Your pictures are lovely.

Ooh la la, I love the tart topped with the berry puree! And I agree, this WAS a lot like a cookie with lots of good stuff on top!

Cooking for Comfort by Jennifer said...

What a beautiful job! Oh, goodness, chocolate syrup would take this over the top!

Oh my, your tart is perfection! I love how great the crust looks and the pear arrangement is so artistic! WOW!

Delicious looking tart, Jacque! Happy New Year to you and your family!

P.S. Jacque, thank you so much for your lovely comments on my cake-decorating attempts. I'm so flattered to hear it from such talented decorator as you are! Thank you!

Jacque, How do you get that all white background in your first two photos? It looks so perfect - I'd love to know your trick. Can you send me a pm? ers1113@gmail.com. Thanks!

Wow!!! What a beautiful tart. Almost too pretty to eat. Fantastic!

It looks awesome with the blackberry puree!

wowzas! that looks professional! it needs to be in the display case of a bakery. great job--the puree looks especially yummy!

i'm going to get off my bum and make it really soon. I can't wait :) Just need the pears! I missed it unfortunately and just read laurie's admonition of rewind recipes. oh well! :(

Gosh, Jacque your tart is beautiful. Your crust so evenly golden as well as the filling. Great description in the body of your blog. Well, its just awesome. Glad you liked it so ....I did too, Thank you for stopping by and leaving kind words.
AmyRuth

Jacque-your tart is stunning!! Makes my "fat" pears look so sad. :o( This was certainly a hit with everyone! Thanks for stopping by my blog, hope you return again soon.

Your tart is beautiful! I love how neatly you fit your pears in the pan, perfect little spokes.

The blackberry puree sounds like an interesting flavor combination with the pear tart.

Oh I love how fancy your tart is!! Thanks for stopping by :) I am going to try a different fruit next time...just to change it up a bit!

Your tart is beautiful! The recipe is a keeper one that I will make again and again!

That looks so good! The blackberry puree was a great idea, too.

Great presentation! This was my favorite baking challenge with TWD.

I update my cherry pie post for you - I baked it at 400 F for about an hour. I started checking before that, at around 50 minutes.

I love almond flavor too, so I thought this tart was perfect. Yours is so pretty! :)

I am liking that blackberry puree. Sounds extra nice with pears :)

Wow, this tart looks so delicious!!!

Oh that looks so good !