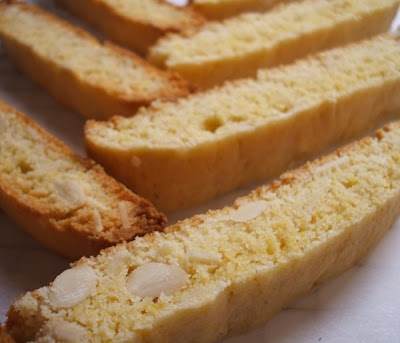 I’ve never quite figured out if my husband reads my blog or not. He probably doesn’t because it would only be another reminder of what a dork he married. No guy wants to admit he married a dork!

But I might find out this week since I'm going to talk about a guy I dated many moons ago, lol.

It was an odd situation with this guy, because I knew I was transferring jobs to another state before we went on our first date. We both knew it wasn’t going anywhere. It was one of those “lets hang out for a while before I leave and never see you again” kind of things. 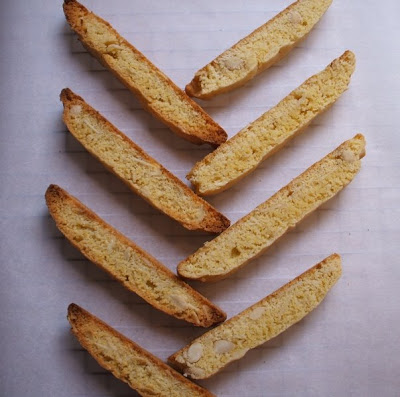 He was the only guy I dated that I would call “fancy”. We actually dressed up to go out on dates! One time we went to Chez Panisse, the famous Berkeley restaurant, and then the old classic movie, “The Red Shoe”. It was fun, but it reminded me of those rare occasions when I was little and I got to play with my mom's makeup. It wasn't really me. It was a "painted on" version of me.

He drove an old Triumph convertible and (I’m getting to the biscotti part now) one time we took his car to an antique car gathering. You know… the kind where everybody parks their car and puts the hood up so you can walk around and admire the shiny, chrome-filled engines and custom upholstery, etc. etc.

He brought a picnic lunch along that had all manner of yummy salads and bread from a corner deli, and for dessert, biscotti. I’m not sure I had even heard of biscotti before. 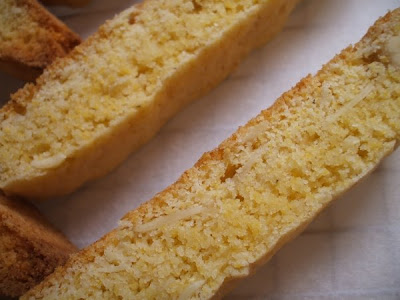 I remember not being very fond of the biscotti, it was simply too hard and dry. It’s a shame really, because that first impression caused me to miss out on this wonderful Italian cookie all these years.

Homemade biscotti are heavenly. I’ve made two different recipes now and its been fantastic both times. Nothing like that store-bought imposter.

When I think of biscotti, I think of that lovely California summer day spent with someone I knew wasn't right for me. It also makes me thankful I found my football-loving, jeans and T-shirt wearing, not-fancy husband. We’re like two peas in a pod.

Thanks so much to Gretchen of Canela & Comino for choosing the Lenox Almond Biscotti for this week’s Tuesday’s with Dorie recipe. It was fantastic, I love, love, loved it. 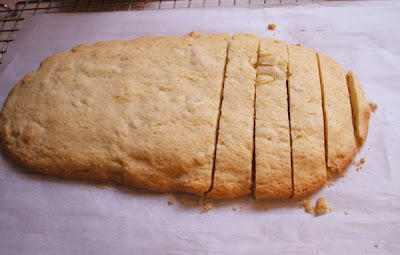 Recipe notes: I baked half of the biscotti as directed. The other half, I only baked once (in my pictures, the biscotti on the left is twice-baked and that on the right is once-baked). I like the softer, once-baked biscotti just a tad more. Also, I used half slivered almonds and half whole almonds (half whole almonds? that sounds funny, LOL). I think I would go with all slivered almonds next time. This biscotti is tender and it wanted to crumble when I was cutting through the whole almonds.
Posted by Jacque at 12:01 AM

Growing up my grandmother always baked them only once and they were great. She used to make a narrow roll of dough about 1/2 " in diameter and cut them into about 1 to 1.5" inches in length. They go great with coffee.

Before you bake you should cut the top where you are going to cut after baked once, it won't crumble then when trying to cut. Make sure you especially get the sides, they tend to crumble worst at the sides